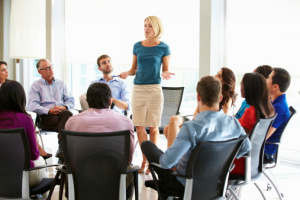 Simple Leadership: To Lead, You Must Tell Stories

Leadership is a simple activity – but “simple” does not mean “easy.” As Chip Heath, professor of organizational behavior at Stanford’s Graduate School of Business, says, “effective leaders are masters of simplicity.” What he means is that leaders are good at identifying the most critical core elements of strategies and highlighting them consistently.

The leader is the guy waving a banner on a hill and screaming, “This way!” so that every member of the group knows where to go.

Because leaders oversee the direction of the entire group, they must be adept at telling stories. Great leaders must be great at selling compelling futures to themselves, to other people, and to other groups of people.

For example, look at David Ratcliffe. David was CEO of Georgia Power from 1999 to 2004. During a high-profile employee lawsuit, David knew it was his job as a leader to help to company get past this obstacle. David did so by identifying the organization’s values as the most important, most central, most core element of Georgia Power’s strategy for overcoming the lawsuit.

For two years straight, David worked relentlessly to elevate a set of values that he called “Southern Style.” David never made a speech without mentioning these values. He tied the “Southern Style” into all of Georgia Power’s most important activities, like the diversity initiative and the leadership challenge.

In order to make these values clear to everyone, David told simple stories that illustrated the “Southern Style.” He told stories about his upbringing in a South Georgia farming community, and he told personal stories about his own journey to understanding the value of each individual employee and customer.

Thanks to David’s clear, simple stories, everyone at Georgia Power was able to understand what was expected of them as leaders, managers, and individuals contributors. David’s simple, concrete stories marked a clear path for Georgia Power to walk.

Leaders tell stories. This is a fundamental characteristic of effective leaders. Stories are how leaders create, outline, and sell visions of the future to the groups they lead.

Great storytelling clarifies, simplifies, and illuminates the principles, processes, and practices that leaders expect of themselves, their employees, and their whole corporation.

So I ask all leaders a simple – but not easy – question: what is your story?